The Swedish Swamp soccer championships are hosted every year by Storuman, attracting players from all over the country and abroad.

Each game of two 10 minute halves features two teams of six players on a pitch that is a carefully prepared northern bog. Many have tried to master the conditions, few have succeeded.

You need stamina, lots of substitutes, masking tape around your shoes and clothes that you don’t plan on using ever again. But most of all, you need a sense of humour - loads of it.

There are three classes, Men, Ladies and Mixed. In the mixed class, two players of both sexes must be on the pitch at the same time.

How often do you get the chance to become a Swedish champion? If you find yourself in the final on Saturday, July 7, then you’ll have that chance.

Swamp volley
Volleyball played in a swamp. Five players are allowed on the “court” and best of three sets wins. A slightly more humane challenge than Swamp soccer but you might still lose a shoe or two during the match.

Swamp volley teams are mixed, again with two players of both sexes having to be on the court at the same time. You could become a Swedish champion here too!

Swamp run
A 400m race through the swamp. Can you continue through the pain barrier? The rules are as simple as the course - 95% swamp, 5% grass - is difficult. Winning is a great achievement as there aren’t many who can put Swamp Run Swedish Champion on their CV. If you beat the course record, you also receive a prize.

Swamp jump
Just like the long jump although here we measure how far your fingertips reach, which means the best technique for this sport is the belly flop. The winner gains a Swedish Champion title and a prize is awarded for the longest ever jump. 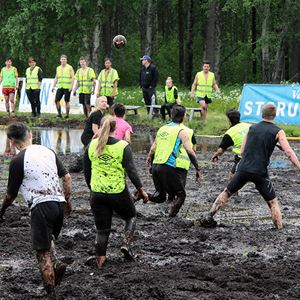 Powered by Citybreak ™ - the leading Destination System
Back to listing